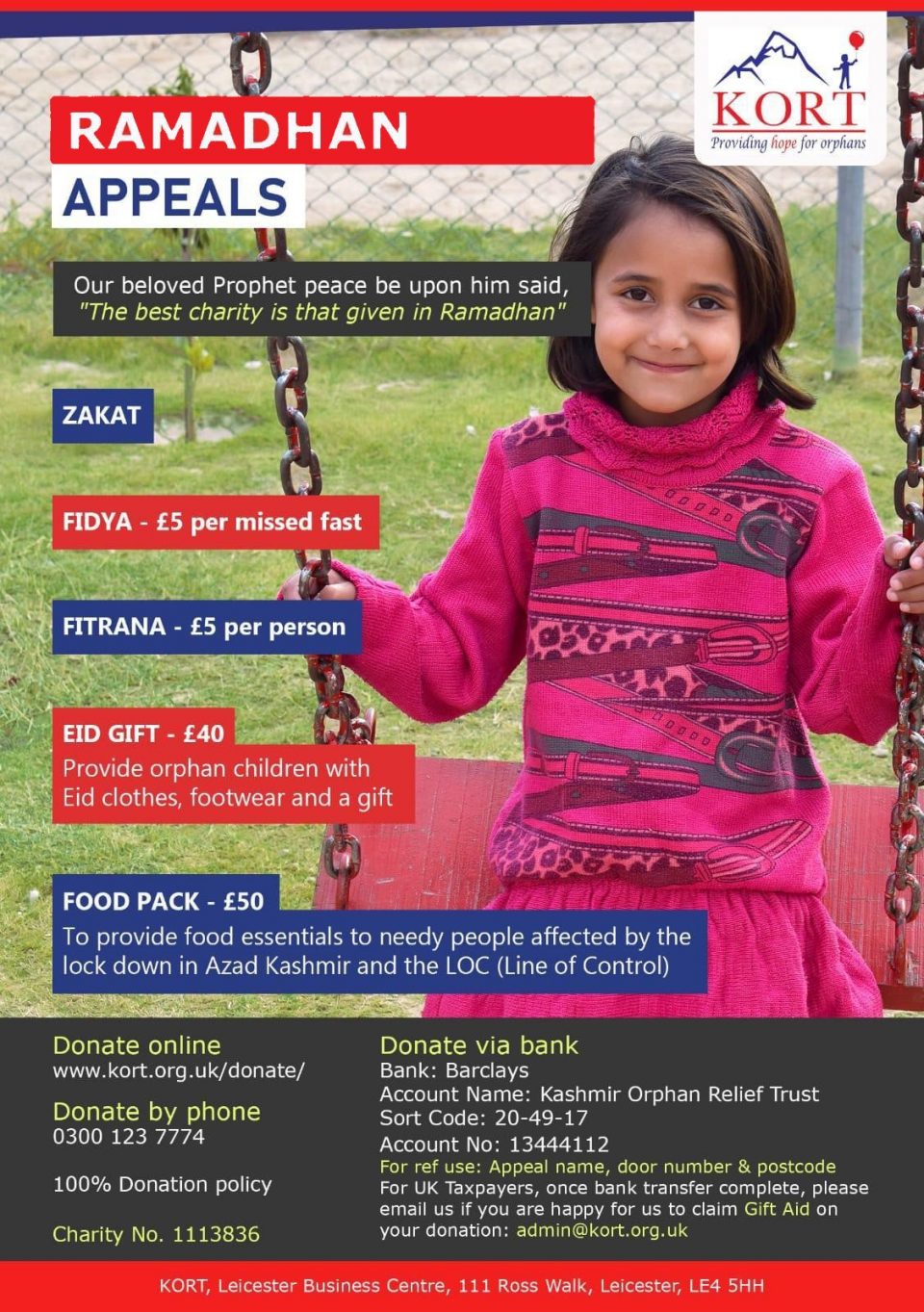 During Ramadan, many Muslims donate Zakat and Sadaqah more than any other time of the year, especially those living abroad in Western countries. Charity may begin at home, but it certainly does not end there.

The word zakat describes the mandatory donation of a portion of a Muslim’s wealth (2.5%). Islamic charities inspire donors to use their services to relieve suffering around the world, victims of natural disasters, the poor, and those in conflict zones. In recent years, relief has been provided in Islamic countries such as Kashmir, Pakistan, India, Gaza, Syria, Yemen, and Iraq.

When essential needs of children are not met, schooling/education is often the last priority. This Ramadan bless the children of Kashmir and Pakistan by sponsoring towards a child, this includes Nutritious meals, Uniforms, Education, General clothing, Housing, Medical care, and Security. All this is possible through your zakat.
Donate zakat to Kashmir Orphan Relief Trust (KORT) to make sure that your zakat reaches the people who are eligible and are in need. KORT depends on these donations to support its charitable work.

Ch. Muhammed Akhtar the founder of KORT had a dream to provide orphan children with hope, by providing them with education, security, normality in life by keeping them off the streets and saving them from becoming victims of organised crime and being used for begging or trafficking.

Alhamdulillah KORT has done an amazing job so far. In the last 15 years it has raised the bar for existing charities operating in Kashmir and Pakistan. KORT was founded by a group of individuals that had no interest in charity organisations. They came to Pakistan in the 2005 earthquake to help the victims of this horrific event. Once they saw the work of other charities and the lack of resources which were available, these friends planned to take some action. They created KORT. In the time since KORT has been active in Kashmir they have helped Hundreds of thousands of people in need. This has only been possible with the support, love and trust of the donors, you people that have been donating your Zakat, Sadaqah and Lillah to KORT.

In the time KORT has served humanity it has:
• housed hundreds of orphans
• built over 350 houses for widows and disabled
• fed over 500,000 poor and victims of disasters
• rescued over 20 abandoned children (youngest being only few hours old)
• built water filtration plants (providing water to whole villages)
• built schools in villages that had no schools
• providing wheelchairs to the disabled
• women empowerment programmes, offering sewing machines

KORT has not only gained the respect and trust from the public but also from the national government of Pakistan and the Pakistan Army. KORT’s work has been recognised by many organisations who have proposed to work with them in future projects.

One of our projects starting in 2021 is building another KORT complex in Sawabi, Alamabad, KPK. This complex will concentrate on orphan boys with disabilities. This will include the deaf and mute, blind and children with physical or mental disabilities. We are working on this project in collaboration with the Pakistan Air Force. Zakat (Alms) is a compulsory act of worship that has special conditions therefore this project (to start construction) will not be a zakat eligible project.

KORT will be starting an appeal for this project in January 2021 and they will be asking for our donors to support them with Sadaqah, Lillah and general donations. The estimated cost for this project is £900,000 which will cover the whole cost from the construction of four buildings to the beds, tables chairs, and all facilities needed to accommodate children challenged with disabilities.

However, many Muslims choose to give charity during the month of Ramadan because the rewards for good deeds during Ramadan are multiplied. So, we urge our supporters to pledge a donation with us and they can pay this amount in Ramadan.

(Syndicated press content is neither written, edited or endorsed by USA Verdict)

The Big Black Book of Business

New Guinea Singing Inu, the most powerful social token ever

The 2022 Web3 Transformation Champions felicitated at the MetaDecrypt Summit