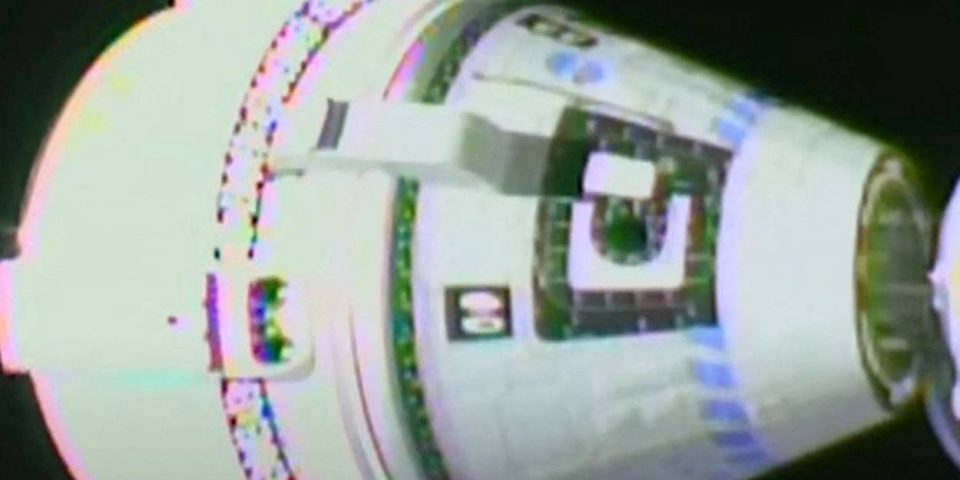 Labout Boeing, Starliner, first docked Friday, May 20, at the International Space Station. This is a success for the company, which in the future must transport astronauts for Nasa, even if this empty test flight took place years behind SpaceX.

The docking to the Space Station (ISS) took place at 20:28 a.m. US east coast time (2:28 a.m. French time, Saturday), with more than an hour late on the schedule originally planned because of final checks during the maneuvers, meticulously choreographed 400 km above our heads.

The astronauts aboard the ISS, and the control room in Houston, closely monitored the approach. Starliner first stabilized about 250 meters from the station. Then, after advancing slightly, the capsule moved back in order to demonstrate that it could retreat if necessary. Finally, after another controlled stop, albeit longer than expected at 10 meters, the delicate final maneuver, carried out while the station is running at 28,000 km / h, was initiated. The vehicle slowly approached, right up to the contact.

TO READ ALSOWar in Ukraine: will the International Space Station fall on our heads?

Five days at the ISS

« Vessel Starliner achieves its historic first docking at the International Space Station, opening a new path to the flying laboratory for crews,” a commentator said on the US space agency’s live broadcast. The hatch of the capsule will be opened only on Saturday. Boeing is carrying about 230 kg of supplies on behalf of Nasa, including food.

TO READ ALSOSpace travel: these unsuspected effects on our body

Starliner must remain docked to the ISS for about five days, before descending back to Earth to land in the desert of the US state of New Mexico, on the base of White Sands. This unmanned test flight had already been attempted in 2019, but the capsule had then encountered several problems and had to turn back without being able to reach the station.

Since then, Boeing has been struggling to catch up with SpaceX, although a newcomer to the aerospace sector by comparison, but which has already been transporting astronauts for Nasa since 2020, after the successful qualification flights of its own capsule, Dragon.

Starliner had taken off Thursday from Florida, atop a United Launch Alliance (ULA) Atlas V rocket. About 30 minutes after launch, the capsule had managed to get on the right trajectory, but two of its twelve thrusters had not worked. Nasa and Boeing officials, however, had downplayed the incident, which they said should not affect the mission.

The thrusters will be used again at the end of the mission, for the maneuver intended to return the capsule to the Earth’s atmosphere. But the problem a priori does not “need to be solved” by then, the previous thrusts having worked anyway, had estimated Steve Stich of Nasa at a press conference Thursday evening. The system “does not pose a risk for the rest of the test flight,” NASA also confirmed on its blog on Friday.

A finally successful end-to-end mission would make it possible to restore a little the image of the aeronautical giant, after repeated setbacks in recent years. In 2019, the capsule could not be placed in the correct orbit due to a clock problem. Boeing then realized that other software problems had almost caused a serious flight anomaly.

A second test to be carried out in the coming months

Then, in 2021, when the rocket was already on the launch pad to retry the flight, a moisture problem had caused a chemical reaction that blocked the opening of some valves of the capsule. She had to return to the factory for inspection for ten months. After the current empty test, a second one will have to be carried out for the spacecraft to obtain Nasa approval, this time with astronauts on board. The schedule will depend on the performance of Starliner this week, but Boeing plans to drive it by the end of the year.

TO READ ALSOThe French armies in the conquest of space

For the American space agency, too, the stakes are high, as it has invested a lot in the development of the spacecraft. Nasa has entered into fixed-price contracts with Boeing and SpaceX, to the tune of several billion dollars.

The choice to use two companies was to encourage competition and never again risk, in the event of a problem for one or the other, being left without an American “taxi” to the ISS. After the shutdown of space shuttles in 2011, and until 2020, Nasa was indeed reduced to paying for places in Russian Soyuz rockets.

EELV or how to discredit French political ecology

Vaccines: where is France in the world