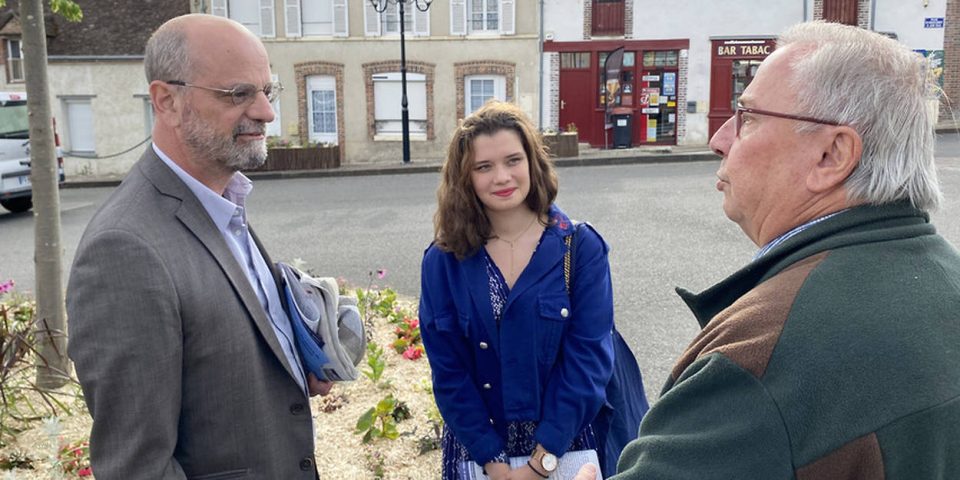 « It’is the Gentleman for politics! “A hoarse voice disturbs the tranquility of the commune of Saint-Germain-des-Prés, in the Loiret. Absorbed by her gardening work, Danielle cannot hide her surprise to see Jean-Michel Blanquer at her gate. With a beret screwed on his head, the ex-Minister of National Education, Youth and Sports strides with an assured step towards the woman of about sixty years. “Hello, here is my program for the legislative elections,” says Mr. Blanquer, now a candidate Together in the 4e constituency of this rural department of the Centre-Val de Loire region. “Thank you very much for coming. We feel completely abandoned, no one comes to see us,” this resident of this village where Marine Le Pen achieved one of the best scores in the second round of the presidential election in the department – collecting 56.08% of the vote.

Challenged by this unusual commotion, some neighbors cross their doorstep to greet the former minister and, above all, convey their grievances to him. “It is absolutely necessary to take up the subject of the medical desert,” a retired woman admonishes him. I won’t be able to see my GP, there are 600 people on the waiting list before me. ” “On this issue, we must in the very short term succeed in being attractive to doctors, attracting competence and vitality. In the medium term, we can welcome the creation of a CHU [centre hospitalier universitaire, NDLR] in Orleans. It had been talked about for decades; Jean Castex made it official by decree on February 22 last year. This is an encouraging first sign,” Jean-Michel Blanquer immediately replies.

Nevertheless, much remains to be done in these rural territories of the Centre-Val de Loire, which constitute the first medical desert in France. One hundred and fifty thousand inhabitants of Loiret – that is, almost a quarter of the population of the department – declare that they do not have a attending physician.

Jean-Michel Blanquer takes advantage of this door-to-door session to emphasize higher education and vocational training, other priorities for the candidate. “It is not normal that there is no university in Montargis [la principale ville de la circonscription, NDLR]. I will do everything possible for the grandes écoles to establish a relay there,” assures the former director general of Essec. “Jean-Michel has an excellent address book that his competitors absolutely cannot boast of. He has an interest in making it one of the major assets of his candidacy,” believes a close friend of this figure of the macrony.

“This is a very valuable region”

In order to get rid of the image of a “parachuted” candidate that sticks to him, the candidate swapped his ministerial files for The Republic of the Center and The Republican Echo – two local newspapers. “The trial that is being brought against me is unfair. I have been on the ground for more than two weeks, traveling every day and meeting all the Loiretans,” Mr. Blanquer defends himself to the Point. His critics hammer that there would be no family ties: this is inaccurate, one of his uncles was a canal engineer in Montargis.

TO READ ALSOThe good, the bad and the historian Pap Ndiaye

His supporters also remind that he has the merit of running for a historical stronghold of the right for more than 60 years, and the only constituency in Loiret where Marine Le Pen came out on top in the second round of the presidential election (52%). “Being invested in this constituency honors me and obliges me. It is a very precious region, which has a lot of assets that need to be better valued: the richness of its history, its landscapes and its economic fabric. The Loiret is also representative of this central axis of France which represents a mental blind spot. Indeed, we think of the Paris-Bordeaux or Paris-Lyon axis, but we too often fail to consider this central axis,” says Jean-Michel Blanquer.

In order to definitively cut short the illegitimacy trial that is being instructed to him, the former minister finally recalls that it is “very classic, in the history of the Republic, to go marry a territory”. The deputy is also a representative of the nation; he is both a national legislator and a local actor. On the occasion of a public meeting organized in Château-Renard, a local resident, whose sympathies do not however go to the former tenant of the hotel on the rue de Grenelle, proved him right: “I do not understand this notion of parachuting. Who in this room was born in this department? “No one in the audience raises their hand. And the man continued: “This is all nonsense. Xavier Deniau, who represented us for thirty years in the National Assembly, hardly knew Loiret until he moved there in 1962. Philippe Séguin, to whom the Vosges owe so much, arrived from Tunisia at the age of 20 and knew no more than you and I about this beautiful department. And I could multiply the examples. »

TO READ ALSOThe staggering mediocrity of the opposition to Macron

“Let’s note in passing that the candidates who make this reproach have just folded their parachute,” recalls a relative of Blanquer. Ariel Lévy, LR candidate who had split a “So, are you visiting? “, when the candidate of the Ensemble list had come to greet him in his permanence in Montargis, was still deputy mayor of the 16e arrondissement of Paris until March 2021 and settled down only two years ago in the Loiret. “For this guy to talk to us about parachuting and old-fashioned politics is still a lot of coffee,” laughs a supporter of Jean-Michel Blanquer. The succession of LR is done for the really old-fashioned shot, Jean-Pierre Door [député LR sortant, NDLR] placing his foal in his circo. It feels like the Old Regime! “The candidate of the RN, Thomas Ménagé, had meanwhile presented himself in the Loir-et-Cher in 2017 and the controversial Yellow Vest and anti-pass health activist Olivier Rohaut – generally decked out with the sobriquet “Oliv Oliv” – became known in Nice.

“The word “airdrop” suggests that I was prepared a ready-made armchair. However, this is absolutely not the case! “Blanquer notes. With two weeks to go until the first round of voting, the battle is indeed shaping up to be a bitter one. The balance of power is not necessarily favorable to the ex-Minister of Education. The RN candidate, Thomas Ménagé, seeks to take advantage of the momentum of the presidential election to make the election a referendum for or against Blanquer. The candidate invested by the Nupes, the communist Bruno Nottin, enjoys a certain popularity, but internal dissensions could harm him – it is, as in other constituencies, a facade alliance, the departmental representatives of the PS, LFI and EELV refusing to support this particularly divisive elected official.

TO READ ALSOWhat his ministers reveal about Macron

Mr Blanquer could also benefit from the division of the right – the dissident candidacy of Philippe Moreau, ex-LR mayor of Nogent-sur-Vernisson, risks preventing Ariel Lévy from reaching the second round. With about two weeks to go until the first round of voting – scheduled for June 12 – the majority candidate is playing for his political survival. But, beyond his personal case, the central issue is to prevent this land of the right from falling into the trap of the National Rally. The candidates will have the opportunity to confront their projects during a debate on France 3, next week.

With Twitter, Elon Musk would become the most indebted man in the world

Les indiscrets – The express promos of the darlings of “Jean-Luc”

#MeTooGay: the investigation into the suicide of Guillaume T. closed without action