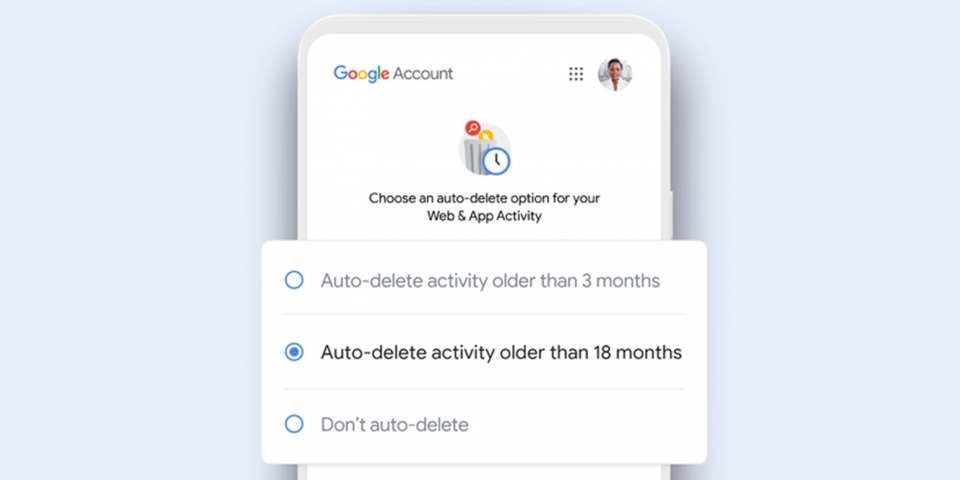 After 18 months and only for new users – existing users should be prominently pointed out the corresponding options.

Google collects data. A lot of data. The company makes no secret of this. After all, these form the basis for many of the services that the software manufacturer has to offer – and of course the advertising business, which guarantees their free availability. In all of this, however, user trust is the top priority, Google assures and reports a number of privacy improvements relating to the Google account.

The most important one: Google will no longer store user data indefinitely. Instead, the “Web & App activity” – where, among other things, all search queries or the website history is saved from Chrome – is now set to a maximum storage period of 18 months. The same applies to the course of the location. In the YouTube Watch History, however, the default value for the automatic deletion of the data is created at 36 months. The reason for this is that it is assumed that a longer period is useful in this case, for example to prevent users from being offered new videos that have already been viewed.

The users could already set such time limits manually, but now there are the standard values ​​mentioned for all new accounts or for all those who have just activated this data storage. The latter is also a point that Google particularly emphasizes in this context: namely that none of these data collections is active from the outset, but that storage only begins after the explicit consent of the user. Technically, that’s true, but at the same time Google has to accept the criticism that when you set up a smartphone, you push very hard for these data collections.

Another point that is close to the heart of the software manufacturer – and which is actually often misunderstood: Google emphasizes that, in principle, you do not sell user data, but evaluate it yourself and then sell advertising to others based on it. In addition, data from those services that are particularly sensitive – such as Gmail, Drive, Calendar and Photos – would generally not be evaluated for advertising purposes.

Incidentally, Google does not want to change anything in existing accounts, after all, one does not want to simply change settings. However, the options for storage duration should be pointed out aggressively in the future. In the coming days, for example, a link will be placed on the Google search homepage that provides information about data storage and gives the option to change the setting. In addition to the complete deactivation of the individual data categories, the period can also be shortened manually – to three months. Conversely, this storage restriction can be deactivated if desired, for example if you prefer to be able to track your own location history in the long term.

Also new: Google users will receive personalized recommendations to improve their privacy settings in the future. This is to warn against, for example, if the location is permanently shared with another person – something about which Google already informs regularly by email anyway. The company extends the security check that Google offers to all of its users by checking the passwords stored in the account. This means that users are warned when saved login information is affected by a known hack. Google already offers a similar function in several places, but by integrating it into the security check, it now wants to give it more prominence.

In addition, you want to further simplify access to the Google Accounts settings. In the future, these should also be offered directly after certain search queries – for example, “Is my Google account secure”. This feature is initially only available in English, other languages ​​are to follow.

Access to the incognito mode that some Google apps now offer should be standardized – and simplified. Long press on the account icon will be used for the change in the future. In this context, Google emphasizes that, in Incognito mode, no user data is actually stored and is also not used for advertising. However, this feature should only appear in the respective apps in the coming weeks – from Google Maps to Youtube. There is only one exception to the iOS version of the Google app: this feature is immediately available.

Finally, there is an extension of those libraries for “Differential Privacy”, which are to ensure that certain data entries and evaluations are possible without traceability to individual persons. There are new interfaces for developers so that they can also be integrated into Go and Java applications. (Andreas Proschofsky, June 24th, 2020)

Xbox Series X & PS5: Many of the current issues are resolved, according to the Layers of Fear makers